This easy pie crust is made with butter. Makes a DELICIOUS double crust! The best part about it is…NO CHILLING! There’s enough dough left over to make adorable cut-outs and place on your pie.  It rolls out so smooth and will bake into a wonderfully golden brown crust! I’m so happy about this pie crust recipe. It’s great to work with and is very tasty!

Here’s what I did: I grated 1 stick of cold butter. Set it the freezer, while I gathered the rest of the ingredients. I mixed together salt, sugar, and flour in a mixing bowl. Added the chilled and grated butter to the flour mixture. I cut in the grated butter using a pastry blender/cutter, until coarse crumbs are produced. You can use butter knifes, or a fork to cut in the butter (the meaning of “cutting in the butter” is to incorporated cold butter to a flour mixture, and form coarse crumbs.This process will produce a flaky texture). The chilled grated butter makes it easier to cut into the flour mixture.

Once coarse crumbs are formed, I added 5 Tablespoons of cold milk. With a wooden spoon, I stirred until a dough started to come together. With my hands, I gently shaped into a dough (don’t over work the dough). I divided the dough in half, and floured the counter. I rolled out the first half of dough to fit an 8 inch pie pan. Filled the bottom crust with a fruit filling. I rolled out the second half of the dough, and brushed the bottom pie crust edges with water (this is to adhere the two crusts together and seal them). Placed the top crust on the fruit filled pie. I trimmed the edges and folded the crust edges up onto the pie. I re-rolled the extra pieces and cut out small circles. I brushed one side of the circle pie dough pieces with water and placed on the top crust. I lightly brushed the entire crust with water and sprinkled sugar on top.

I can’t get over how gorgeous that grated butter looks! Baker problems…

Not hard at all. Soon you’ll have a fresh homemade pie baking in the oven! And the house will smell soo good!

The pie pictured above, tucked into my easy pie crust, is my Fresh Raspberry Pie. Perfect for raspberry lovers!

Step One: Grate 1 stick of butter in a small bowl or plate, and place in the freezer for 5 minutes. Mix together the salt, sugar, and flour in a mixing bowl. Add the chilled grated butter to the flour mixture. Cut in the butter with a pastry blender/cutter, butter knives, or fork, until coarse crumbs have been formed (the coarse crumbs will look like thick sand).

Step Two: Pour in the 5 Tablespoons of cold milk. Stir to combine with coarse crumb mixture. Use your hands to form and shape into a dough. Divide the dough in half. Flour the counter, place one half of pie dough onto the floured counter. Press down the dough and sprinkle flour on top. Use a rolling pin to roll out the pie dough to fit an 8 inch pie pan.

Step Three: Gently, roll up the dough around a rolling pin. Transfer the dough over to a pie pan, and carefully shape into the pan. Roll out the second half of pie dough. Brush the bottom crust edges with water (this will adhere the two crusts together to seal).  Place the second crust on top of filled pie. Trim the edges and crimp them to seal. You can use your fingers, the tines of a fork, the back of a spoon, or simply fold the edges up on to the pie. Re-roll any left over pieces and cut out small designs to place on the pie crust. Make sure to cut a few slits in the top of the crust, to release heat while baking. Brush the pie with water and sprinkle sugar over the top.

Note: To “cut in the butter” means to incorporate cold butter with a flour mixture, and form coarse crumbs. This will produce a flaky texture.

A food processor can be used to make this easy pie crust. Just place the cold grated butter, salt, sugar, and flour into food processor. Pulse together until coarse crumbs form (it will look like thick sand). Slowly pour in the cold milk, and pulse until a dough forms. 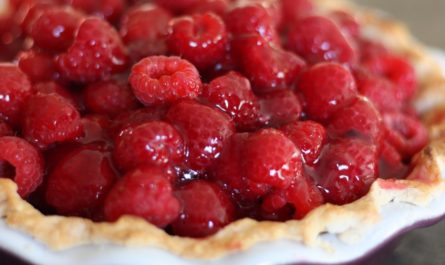